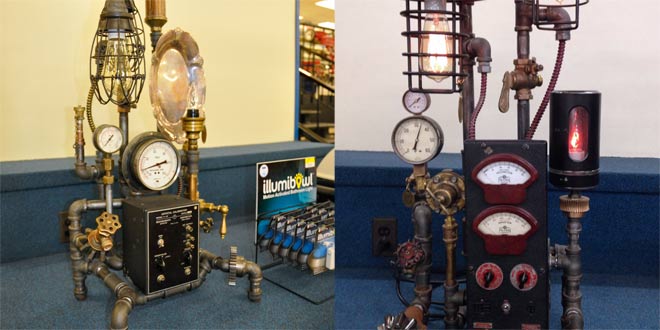 It’s easy to start a conversation with customers heading back to the plumbing department at Meyer Hardware in Golden, Colorado. They’re likely to stop and point to the unusual lamp displayed there.

Created from a mixture of plumbing fittings and other miscellany, the lamp catches most people’s attention and helps owner Steve Schaefer start a conversation—a great way for him to get to know his customers.

The lamp is a creation of a local artist, the uncle of one of Schaefer’s former employees. “The creator of the lamp has a few similar ones on display in an art gallery in Denver,” says Schaefer. “But we let him put one here in the store. It spurs a lot of curiosity among customers, and we have a number of people who come in just to take a picture of it.”

The lamp is made from pipe parts from the store, as well as other items the creator found at garage sales. It’s also available for sale, but most customers prefer to look.

With a store at the foothills of the Rocky Mountains, Steve Schaefer is used to seeing a lot of tourists. While he offers them a number of niche items, such as fishing equipment and giant tubes for floating on the nearby river, having a curiosity such as the lamp gets his customers talking and gives him one more way to set his store apart from other retailers. 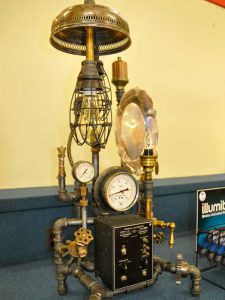 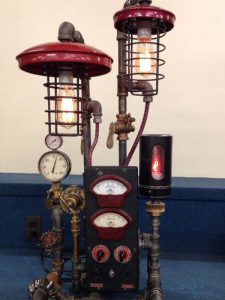 Lynnea is the senior graphic designer for Hardware Retailing magazine, where she works on the layout and design of the magazine and other custom publications. She also does print design for NRHA’s marketing materials, programs and other in-house projects. Lynnea graduated from Ball State University with a degree in Graphic Design. She lives in her hometown of Greenwood, Indiana. During her free time, she enjoys designing, painting, reading and volunteering at her family-owned childcare facility.
Previous Tractor Wheel Covers
Next What Business Issues Will Be on State Ballots on Nov. 8?