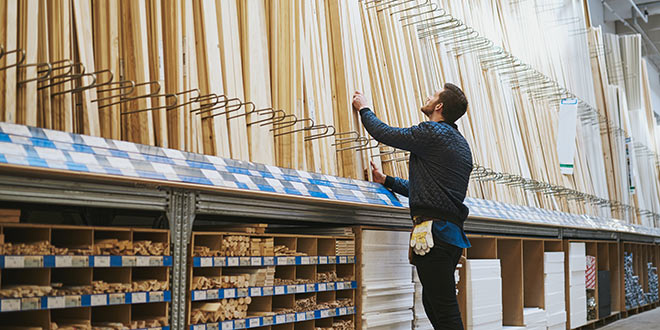 A new U.S. tariff on imported Canadian softwood lumber, such as pine, is the latest change to an old trade debate between the two countries.

The U.S. government, as of late April, is implementing a 20 percent tariff, or import tax, on Canadian softwood, which is commonly used in homebuilding, CNN reports.

Lumber sellers have been anticipating the tariff and increasing prices since the presidential election in November, says Ray Formosa, president of Brooks Lumber in Detroit. Brooks Lumber buys some Canadian utility- and economy-grade lumber, which is used to build commercial pallets.

Due to competition, the tariff will impact lumber prices throughout North America, Formosa tells Hardware Retailing.

“It’s going to have a domino effect,” he says.

Construction costs will increase as a result, but Formosa doesn’t think his business will suffer.

“If everyone else’s prices are going to go up, so are mine,” he says. “I really don’t foresee it changing our business because everyone is in the same water. Nobody likes higher prices, but then again, if you’re all doing it, I say everyone’s going to have the same impact.”

American homebuyers will feel the effects of the tariff directly, with home prices rising with the cost of the lumber to build them, according to the National Association of Home Builders (NAHB).

Lumber companies in the U.S. expected the tariffs, and many have already raised prices accordingly, Granger MacDonald, NAHB chairman, says in a statement.

Kenyon Noble Lumber & Hardware in Bozeman, Montana, has been planning ahead for the tariff since January, general manager Mike Thompson tells Hardware Retailing.

“If you appropriately planned for the tariff, then it shouldn’t effect your business,” Thompson says.

“America must import about one-third of its lumber supply from Canada because U.S. lumber production is simply not robust enough to meet the nation’s needs,” MacDonald writes in a commentary for Fortune magazine. “Therefore, lumber imports are vital for the construction of affordable homes for American families.”

The trade arguments over softwood lumber, which “is preferred by builders for constructing home frames,” date back to the 1980s, Bloomberg reports.

When a prior trade agreement ended, “a group including U.S. timber companies petitioned an independent government agency and the U.S. Commerce Department for duties on lumber imports from Canada, saying the country unfairly subsidizes its own industry, costing profits and jobs,” the Bloomberg article says.

The new tariff wasn’t a surprise, according to The Huffington Post.

“The move was expected: the deep-rooted dispute over lumber pricing between the two countries has led to once-a-decade trade skirmishes over the issue, resulting in American duties, then the inevitable court battles, and ultimately negotiated settlements,” The Huffington Post reports.

Kate is profiles editor for Hardware Retailing magazine. She reports on news and industry events and writes about retailers' unique contributions to the independent home improvement sector. She graduated from Cedarville University in her home state of Ohio, where she earned a bachelor's degree in English and minored in creative writing. She loves being an aunt, teaching writing to kids, running, reading, farm living and, as Walt Whitman says, traveling the open road, “healthy, free, the world before me.”
Previous Jet.com Founder Helps Walmart Innovate
Next Handheld Battery Window VAC