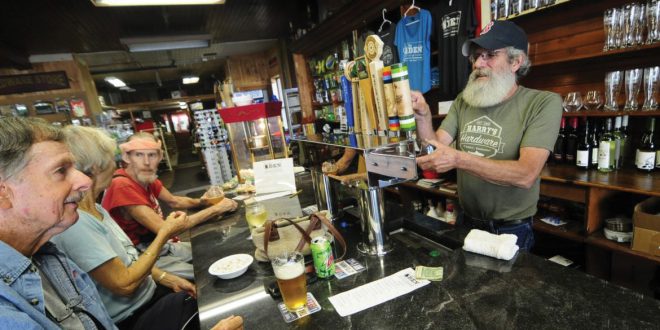 Vermont Retailer Serves Music and Drinks at The Den 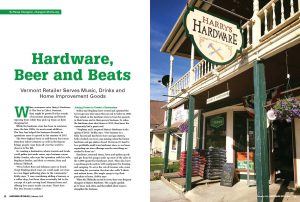 When customers enter Harry’s Hardware & The Den in Cabot, Vermont, they might be greeted by the sounds of musicians jamming and friends enjoying beers while they pick up items on their shopping list. 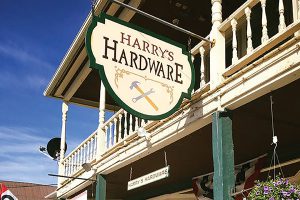 While the hardware store has been in existence since the late 1800s, its most recent addition, The Den, has helped the business diversify its operations since it opened in the summer of 2017.

The New England town is well-known for tourist attraction Cabot Creamery as well as the famous foliage people come from all over the world to observe in the fall.

So creating a destination where tourists and locals could gather just made sense, says business owner Bobby Searles, who runs the operation with his wife, Stephany Searles, and their co-owners, Rory and Johanna Thibault.

“Even before Rory and Johanna came on board, I kept thinking about ways we could make our store an even bigger gathering place in the community,” Bobby says. “I was considering adding a brewery or a coffee shop, but those ideas eventually led to the concept of a pub serving local Vermont beers and offering live music inside our store. That’s how The Den became a reality.”

Joining Forces to Create a Destination
Bobby and Stephany have owned and operated the town’s grocery store since they moved to Cabot in 2006. They relied on the hardware store in town for projects in their home and in their grocery business. So when the hardware store shut down in 2012, they knew the community had a great need.

“Stephany and I reopened Harry’s Hardware in the spring of 2013,” Bobby says. “Our business is a fully functional hardware store and gas station, both of which our town was missing when the former hardware and gas station closed. However, it’s hard to be a profitable small town hardware store, so we knew expanding our store offerings was the next thing we needed to focus on.”

Hardware, seasonal items, lawn and garden goods and gas from the pumps make up most of the sales at the 3,000-square-foot hardware store. They also have a sporting goods section with equipment for hunting and camping. To serve the out-of-towners who come searching for souvenirs, the store also sells T-shirts and artisan items, like maple syrup to top their pancakes at home, Bobby says.

When the Thibaults moved to town, they were frequent shoppers at Harry’s Hardware. The couples quickly go to know each other, and they talked about ways to strengthen the business.

Eventually they decided to become business partners. Rory and Johanna bought their share of the business in April 2017.

“Before we could make The Den a reality, we knew we had to adjust the hardware store and trim down on areas that weren’t as important to make room inside the store,” Bobby says. “The four of us evaluated our inventory and what our customers were buying and not buying to decide what needed to stay or go.”

Serving Local Flavor and Enjoyable Music
In the summer of 2017, the owners launched The Den, which is located inside the store near the checkout counter. It features a 12-foot granite bar top and is built of hardwood, evoking a traditional Vermont style.

The Den’s drink lineup includes Vermont craft beers on tap, as well as wine, and other nonalcoholic beverages, including locally made kombucha on tap. The owners decided to exclusively sell Vermont craft beer in an effort to support other local businesses.

“We have had a really good response from community members and visitors,” Bobby says. “During the last busy fall foliage season, many visitors stopped by to check out our store, enjoy a beer and listen to music. The bed-and-breakfasts and other local businesses recommend visitors stop by Harry’s Hardware & The Den, and that has really helped us widen our reach.”

In addition to becoming a fun place for people to grab drinks and catch up, music became an additional offering at The Den that has continued to grow since the first musicians stepped on stage. 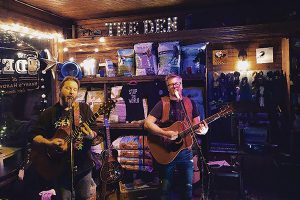 “We thought it might be cool to have musicians come play here, but the live music organically became part of the experience here after we had someone ask to play here,” Bobby says. “We initially thought Saturdays would be the one day we’d have live music, but quickly people requested to play, and now we book up weeks in advance.”

Additionally, on Sundays, the store has anywhere from two to 10 musicians that will come and jam together from noon until 2 p.m., which helps draw in customers who come enjoy the music and a beer while the musicians practice and improvise.

“The Den has been a great addition to the business,” Bobby says. “It’s an added income stream, and it has even boosted our hardware business. People come to grab a beer and listen to music, and they’ll remember they had items they forgot to buy that they can get from us, or they might impulse shop.”

Throughout the year, the business hosts a few large events, bringing live music, local artisans and food trucks to the community.

“If you come in the summer, we host a music festival that has attracted over 500 people to our store,” Bobby says. “In the winter, we host an outdoor holiday market, with vendors selling local goods under tents with lights strung along. We set up heaters and hobo barrels to keep shoppers warm while they browse. Anything we can do create a gathering spot in our small town is huge.”

For retailers who have considered other ways to diversify their business, whether adding a new niche or opening a bar, Bobby says it’s important to figure out how to keep customers coming back for more.

“I used to hear from my customers, ‘I can get this item cheaper at Home Depot,’” Bobby says. “Now they tell me, ‘I like coming here because I can get what I need and drink a beer at the same time.We have strengthened our business by focusing on the hardware store items our customers actually want and showcasing The Den, our passion project that has really brought people together.”

Renee Changnon is the retail outreach coordinator for NRHA. She meets with retailers in their stores and at industry events and introduces them to the services NRHA provides. Renee previously worked as a member of the NRHA communications team. She earned a degree in visual journalism from Illinois State University, where she served as the features editor for the school newspaper. After college, she implemented marketing and promotions initiatives at Jimmy John’s franchise locations across the country. She enjoys exploring books with her book club, Netflix marathons and hosting goat yoga at her apartment complex. Renee Changnon 317-275-9442 rchangnon@nrha.org
Previous Practical Store Services Retailers Should Consider
Next Burger Battle Draws Hungry Crowd to Minnesota Business