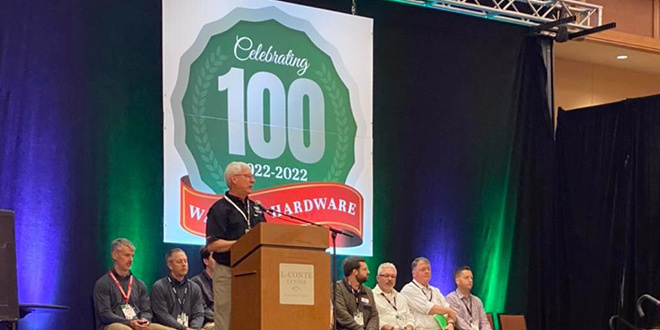 From enjoying the first in-person market since the start of the pandemic to marking 100 years in business to a name and logo change, Wallace Hardware had much to celebrate at the Spring 2022 Dealer Market. The market was held at the LeConte Center in Pigeon Forge from March 22-24 and welcomed attendees to shop products and deals on the show floor, connect with fellow retailers and have a chance to win over $100,000 in giveaways.

“This is the first time we’ve been able to have an in-person show in the last two years due to the pandemic,” says president and CEO Doyle Wallace. “There has been a pent-up demand from both the vendors’ side to come back because they have a lot of new products, and on the customers’ side to come see the vendors and to participate again.”

The event kicked off with the 100-Year Celebration Kickoff, where attendees heard how Wallace Hardware has grown throughout the years and what the company has planned for the next 100 years. The company announced a new logo and name, Wallace Distribution Company, that aligns with Wallace Hardware’s business as a wholesaler.

Following the kickoff event, the Wallace dealer market show floor opened with over 150 vendors sharing new and favorite products and plenty of deals. The second day of the show started with the 2022 Breakfast and Deals of the Century, followed by another full day of show floor deals and the “Dinner on Us” cash handout at the end of the day.

Wallace said that the shows are a great opportunity for the customer to be the dealer and to be able to buy things in advance, get extended dating and special pricing.

“They get to look at new displays they may want to incorporate in their stores,” he says. “These shows are the standard in the industry. We’re not the only ones putting on these shows. Everybody has shows. We like to say there is magic at a Wallace Show because this is a place where a customer can get to know the Wallace personnel better and be treated special.”

Wallace Hardware’s next in-person show is scheduled for September.

Lindsey joined the NHPA staff in 2021 as an associate editor for Hardware Retailing magazine. A native of Ohio, Lindsey earned a B.S. in journalism and minors in business and sociology from Ohio University. She loves spending time with her husband, two kids, two cats and one dog, as well as doing DIY projects around the house, going to concerts, boating and cheering on the Cleveland Indians.
Previous Best Practices for Creating a Strategic Plan
Next Skilled-Trade Programs See Boost in Enrollment