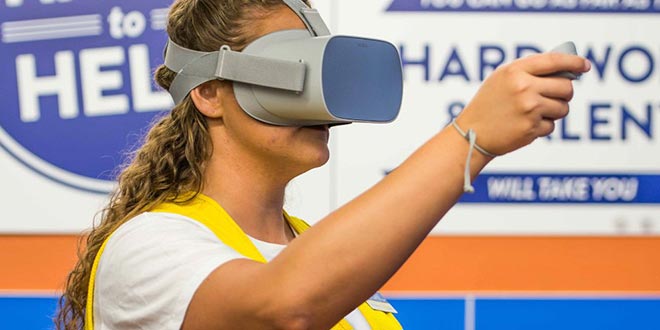 Walmart will deploy 17,000 Oculus Go virtual reality headsets to train more than one million employees across the country, the company reports.

The company is launching the virtual reality training this month and will send four headsets to each Walmart Supercenter and two headsets to every Neighborhood Market and discount store it operates in the U.S., according to the company.

Walmart US Academies senior director Andy Trainor says the headsets are a useful training component because they allow users to feel like they are actually experiencing a training scenario in real life.

“We’ve also seen that VR training boosts confidence and retention while improving test scores 10 to 15 percent—even those associates who simply watched others experience the training saw the same retention boosts,” he says.

Walmart will use virtual reality to train its employees in “new technology, soft skills like empathy and customer service, and compliance,” the company says.

Walmart piloted using the headsets for training purposes earlier this summer, when associates were given lessons on how to operate the company’s Pickup Towers.

Walmart has embraced technology to streamline operations. In November 2017, the company added aisle-scanning robots to 50 U.S. stores, and in July, it adopted Microsoft’s cloud data technology for in-store use.

Todd is trends editor for Hardware Retailing magazine. He graduated from Indiana University where he majored in journalism and French. Throughout his career, he has aimed to highlight small businesses and their community value. He joined NRHA in 2017.
Previous PRO Group Promotes Wodark to CFO
Next 2018 Holiday Sales Projected to Rise More Than 4 Percent