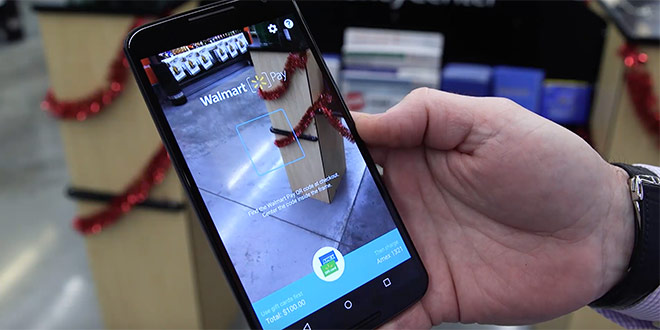 Walmart has introduced its own mobile payment platform, Walmart Pay, which allows shoppers to use QR codes to check out at cash registers and make digital payments.

Walmart Pay is the newest feature incorporated into the retailer’s app, which has 22 million active users each month. The new mobile payment feature “works with any iOS or Android device, and with any major credit, debit, prepaid or Walmart gift card” through the company’s app, according to the retailer. Shoppers can use the cameras on their phones to scan a code and pay for purchases instead of pulling out credit cards to swipe.

Walmart is only introducing the mobile payment feature in select stores this month, but the company has plans for a nationwide launch during the first half of 2016, according to an article from USA Today.

“The Walmart app was built to make shopping faster and easier,” says Neil Ashe, president and CEO of Walmart Global eCommerce. “Walmart Pay is the latest example– and a powerful addition– of how we are transforming the shopping experience by seamlessly connecting online, mobile and stores for the 140 million customers who shop with us weekly.”

Some analysts don’t see that change as making much difference in business, USA Today reports.

“It’s not a game-changer, in my opinion,” Brian Yarbrough, consumer research analyst with Edward Jones says in the USA Today article. “It’s not going to drive more customers to Walmart.”

Renee Changnon is the retail outreach coordinator for NRHA. She meets with retailers in their stores and at industry events and introduces them to the services NRHA provides. Renee previously