Home » Operations » Welden Hardware Counts Down to a Historic Celebration 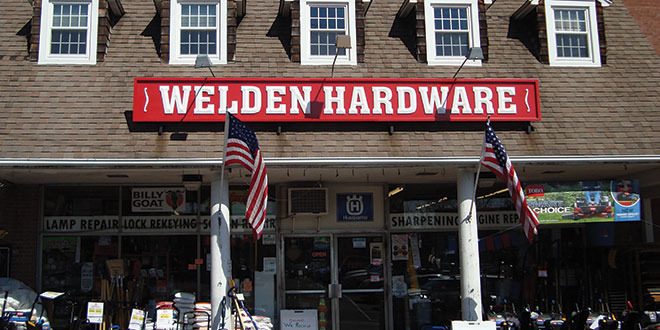 Welden Hardware Counts Down to a Historic Celebration

Melissa Brett and her husband John have owned Welden Hardware for 15 years, but the business has been in operation in Simsbury, Connecticut, for 130 years. Late last year, the Bretts and their store manager started brainstorming ways to celebrate Welden Hardware’s 130th anniversary.

“There aren’t too many long-term established businesses in town,” Melissa Brett says. “We started wondering, ‘What else happened 130 years ago?’”

Brett was inspired by the active community the store has on Facebook, and she developed a campaign to highlight the events that happened the same year Welden Hardware opened for business.

“It took a lot of digging to discover what else happened in 1889,” Brett says. “It made it almost like a treasure hunt.”

Since the start of the year, Brett has been sharing events that also occurred that year: the invention of the first mechanical dishwasher; the World’s Fair in Paris; the inauguration of President William Henry Harrison. All of the posts entice followers to ask, “What else happened in 1889?”

The records of the exact day that Welden Hardware opened have been lost, so the Bretts chose May as the month to host the anniversary celebration. They plan to host a grilling event, and they are working with a local T-shirt business to have anniversary shirts and reusable shopping bags made.

As time gets closer to the event, Brett says they will start collecting stories from customers to post online and in the store.

“We want people to tell us what makes this a special hardware store to them. There are people who came here with their grandparents decades ago, and now they are grandparents and bring their grandchildren,” she says. “It’s nice to go back and look at what has made us successful. We want to capture those stories more than just hearing them in passing in the aisle.”

Brett says they plan to ask customers to write down their memories and share photos. She wants to display them on the checkout counter for other customers to learn about the business’s history.

“We want to share those stories to keep the encouragement for new people to town, so they know we’re here for the long haul,” she says. “And maybe, in another 130 years, someone else might have those records.”

Melanie is the managing editor for the North American Hardware and Paint Association. She has worked for the association since 2016. In her spare time, she enjoys cooking and baking without recipes and watching online makeup tutorials. She and her husband are raising their son and two fur children in Indianapolis.
Previous Papenhausen Hardware Operating Popup Store After Fire
Next Newby’s Ace Hardware Hosts Prom Dress Drive