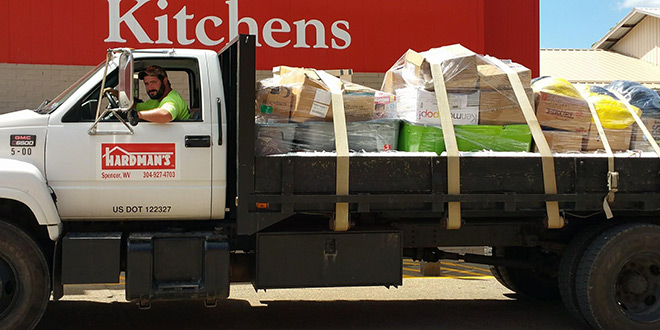 In the wake of widespread flooding that killed 23 and left thousands homeless in the state of West Virginia, several businesses found ways to organize and bring relief to victims.

Hardman Supply Company is one of those businesses. They continue to provide relief and support by collecting and delivering donations to those in need.

Responding to a Crisis

Although two of Hardman Supply Company’s stores are located in the disaster area in Roane and Nicholas counties, the floods affected neither store. The major flooding occurred 20-25 miles south of both storefronts, Tom Hardman, company president and CEO, says.

“I knew there were problems in the southeastern portion of the state as early as Friday evening,” Hardman says. “However, I did not realize until church on Sunday, that the flooding was so severe and had impacted the town of Clendenin, an adjacent area so close to us. I have been on many church mission trips following Hurricane Katrina and was well aware of the type of devastation that these homeowners were experiencing.”

That Sunday, Hardman gathered up all of the square-point shovels and 5-gallon buckets they had, which totaled about 80 of each, and made a couple trips to the nearest relief centers. As he made deliveries, it struck him how severe the situation really was. He knew more had to be done to help.

“After seeing the numbers of people showing up for cleaning supplies, I knew this was a major disaster,” he says. “The next day, we started organizing a donation center for our walk-in customers that wanted to contribute in some manner.”

Hardman’s set up a donation box at the front of the store and alerted Facebook fans that the Spencer store was collecting donations. The Spencer store accepted donations such as cleaning supplies, drinking water, canned foods, diapers, pet supplies and emergency items like flashlights, batteries, first aid kits, work gloves and more. And people were generous.

From local shoppers to individuals making the trip to donate after seeing Facebook posts, Hardman Supply Company was able to deliver two truckloads of donations and two and two SUV loads to relief centers.

A Country Coming Together

The response from those outside of the state following the disaster was also huge, Hardman says.

“Within hours, a Swift Water Rescue team from Tennessee came with boats to accompany local first responders to rescue stranded people,” he says. “Within a day, a spontaneous relief center popped up in the parking lot of a flooded grocery store.”

Additionally, many Non-Governmental Organizations (NGO’s), like the American Red Cross, Salvation Army, churches and civic clubs showed up to cook, clean and provide counseling services for homeowners, volunteers, emergency personnel and others impacted by the flooding in West Virginia.

There were many West Virginians that came to the aid in the relief efforts. The many ways the state has seen support has been huge, Hardman says. Well-known athletes, sings and actors have used their voice and platform to raise money or lend a helping hand.

Coach Nick Saban of the University of Alabama and Coach Jimbo Fisher of Florida State University organized a truckload of equipment to replace the damaged football gear from the six middle schools and high schools that were flooded.

While Hardman’s is no longer accepting emergency supplies, the company has partnered with another organization to accept furniture.

“The town of Clendenin, which is about 25 miles south of us, was devastated,” Hardman says. “With a population of about 1,200 people, over half of the residential homes are probably uninhabitable and will be torn down. Every business in town was flooded and will struggle to reopen. The Clendenin Elementary and Herbert Hoover High School have both been condemned. Along with the loss of lives, this community has a long road to recovery.”

To raise funds, Weber Grills donated two grills for Hardman’s to raffle off.

“We greatly appreciate Weber stepping up and assisting us,” Hardman says. “With the money generated from the raffle, we will combine that with other cash donations are customers are making.”

In addition to the raffle, the company set up an account where cash donations can be sent.

“We are partnering with a local bank by setting up an account where cash donations can be sent,” Hardman says. “Hardman’s is matching the bank’s donations as a start to this needed source of assistance. This bank had a branch in Clendenin that flooded, but is still trying to reach out to the community to help in any way possible. Both of us will administer the funds in order to make sure they are wisely spent.”

Check out this photo gallery for more images from Hardman Supply Company.

Renee Changnon is the retail outreach coordinator for NRHA. She meets with retailers in their stores and at industry events and introduces them to the services NRHA provides. Renee previously worked as a member of the NRHA communications team. She earned a degree in visual journalism from Illinois State University, where she served as the features editor for the school newspaper. After college, she implemented marketing and promotions initiatives at Jimmy John’s franchise locations across the country. She enjoys exploring books with her book club, Netflix marathons and hosting goat yoga at her apartment complex. Renee Changnon 317-275-9442 rchangnon@nrha.org
Previous Espresso Wood Stain
Next What Do Consumers Like About Your Store?