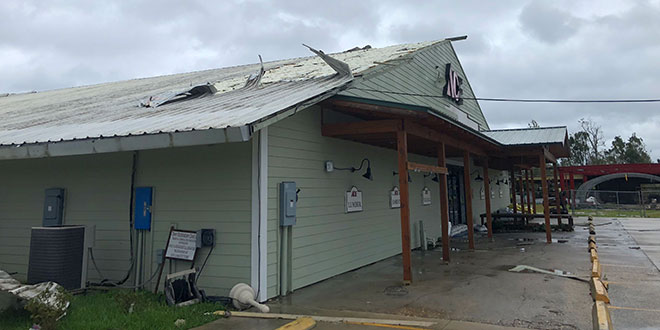 When Hurricane Michael first came on the radar in October 2018, Florida residents planned to ride out the category 1 hurricane and then resume their day-to-day lives. Overnight that changed. Michael quickly escalated from a category 1 into a category 4 hurricane, and continued to cause massive damage once it made landfall on Florida’s panhandle.

One community directly impacted by the storm was Wewahitchka, Florida. The town of about 3,000 people was without power or phone service for days, but soon after the storm passed through, employees from Wewa Ace Hardware jumped into action. Even though the store’s building suffered damage, the team was on hand to help their community members just days later, says Dawn Lister, operations manager for the store.

“Our community was not prepared when Hurricane Michael hit,” Lister says. “The storm intensified so quickly, and nobody realized how bad it was going to be. However, our team came together to help our neighbors in the days and weeks following, and we continue to be there as people are rebuilding what was lost.”

Help After the Storm

On Oct. 10, Hurricane Michael hit land and moved toward Wewahitchka, destroying trees and homes in its path. Around 3 p.m. that afternoon, residents stepped outside to see the damage the storm left in its wake.

“About 30 minutes after Hurricane Michael passed through town, people were cutting down trees and clearing debris to help their neighbors,” Lister says. “I live about a quarter of a mile from the store, so once I could get there, I went and discovered that not only did the store have severe damage to the roof, but the entire back wall of the business was gone.”

Although seeing the damage to the store was shocking, Lister says she and her coworkers knew community members were in great need of the products the store carried. The day after the hurricane hit, Lister and three other employees opened the business at 5 a.m. and got to work helping their neighbors.

For several days, Lister and the employees who could make it to the business served their customers by hand, writing all items purchased on paper and listing their price, then taking cash, checks and in some cases, their word. The following week, the store began using a credit card processing account so their customers who didn’t have enough cash could buy what they needed.

“By the Saturday after the storm hit, all of our employees were back at work,” Lister says. “We even had an employee who lost everything come, too. I’m so proud of those I work with for being so dedicated to helping our customers even while they were dealing with the aftermath of the storm as well.”

Along with locals coming to the shop to get the items they needed, an influx of people began arriving to lend a helping hand.

“We have lots of people here doing what they can to help us get back on our feet, which we really appreciate,” Lister says.

Focused on the Future

Although it’s been a few months since the hurricane, locals are still working to fix their homes and get the town back to what it was. Since Wewa Ace Hardware faced significant damage as well, Lister says it will be a while before the store is back to normal.

Damage done to the building after the hurricane was totaled at about $700,000, but with significant rain in the weeks following, there is an extra $120,000 worth of damage, she says.

“We had a contractor come and help put up particle board on the exposed wall of our store, but with all of the rain we’ve had following the hurricane, it’s been making the damage worse,” Lister says. “Our insurance has been great, but we just have a lot of work to do.”

While they still need to fix the building, the store has been a resource for those who need it most, even opening up the doors late if a customer has an emergency, Lister says. And although everyone has faced some form of devastation to their homes or businesses, the tight-knit community continues to support and help one another.

“If someone was displaced from the storm, a neighbor or relative brought them in and has helped where they can,” Lister says. “It’s been amazing to see the support neighbors have given one another after the hurricane. We were out of power and cell phone service for a few days, and everyone was outside on their porches talking and being there for one another. It’s really been powerful to see the strength of my community, even at such a difficult time.”

Although it’s been through difficult circumstances, the business has done well following the hurricane, she says. The store is currently offering lumber and roofing packages for customers, and other items that have been purchased include everything from tarps and gas cans in the days following to now focusing on lumber and building materials for the rebuilding process. Lister says this will probably last for another year and half before the community is back to normal.

While the town has received lots of help from others, the most important thing they need is support in the form of physical labor to help rebuild and clean up. A few different religious organizations have come to town to volunteer by cleaning yards and tarping roofs, but the process of rebuilding has taken longer because there are only a few companies in town to handle all the roofs and building repairs that are needed.

Although rebuilding may be a slower process, Lister says the experience has helped instill her belief that most people are good.

“This experience really gave me faith in humanity,” she says. “Most people really are good and seeing people work together in my community proves that. Everyone is here to help one another.”

In addition to really bonding with customers to help get back on their feet, Lister says the hurricane has even brought her team of employees closer together than before.

“After this experience, I would definitely say the team at Wewa Ace Hardware considers each other family,” Lister says. “We have all gone through a difficult experience and have been there for one another. It’s been a great thing to see.”

Renee Changnon is the retail outreach coordinator for NRHA. She meets with retailers in their stores and at industry events and introduces them to the services NRHA provides. Renee previously worked as a member of the NRHA communications team. She earned a degree in visual journalism from Illinois State University, where she served as the features editor for the school newspaper. After college, she implemented marketing and promotions initiatives at Jimmy John’s franchise locations across the country. She enjoys exploring books with her book club, Netflix marathons and hosting goat yoga at her apartment complex. Renee Changnon 317-275-9442 rchangnon@nrha.org
Previous Well Pump
Next Cooking With Chef Chad