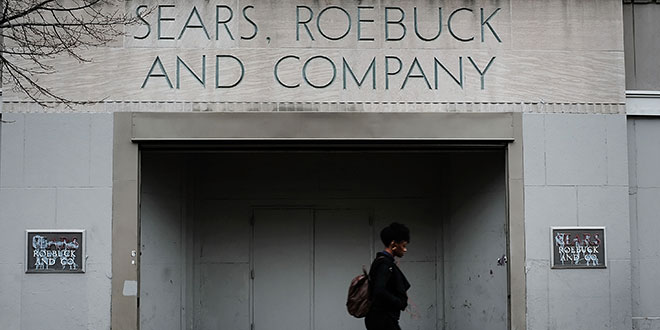 When Sears Soared and Stumbled

Historian Jerry Hancock grew up in the shadow of Sears. He says that as a child in rural Georgia, the company influenced almost every aspect of his life. From the tools his father used around their home to the clothes he wore to school, Sears’ mark on his childhood—and that of countless others—is unforgettable.

Hancock says he was initially curious as to how a company that got its start in Minneapolis and later set up its headquarters in Chicago had such a profound influence on southern culture, but as he studied the company as a college and graduate student, he learned its community outreach spread across the country.

“Sears believed they had a responsibility to the communities they served. They had all sorts of programs they established across the country and in the south. I think Sears understood the south had a lot of potential and they saw the region as a testing ground for a lot of their agricultural programs,” Hancock says.

In the 1910s, the company established the Sears Agricultural Foundation (which later became the Sears Foundation). Hancock says the organization set up a farmers market at the Sears plant in Atlanta during the Great Depression to help farmers diversify their crops and establish a connection with urban customers.

“That was the first step,” Hancock says. “After that, they did all manner of things like college scholarships through the University of Georgia. They even brought cattle from Texas to try to improve the bloodlines of the cattle in the region.”

After their efforts in the south proved successful, Sears expanded these initiatives nationwide, Hancock says. As the 20th century progressed, Sears built more retail locations across the country and became a cornerstone of commerce.

“I think probably the biggest problem with Sears in the late 20th century was that they really had a ‘too-big-to-fail’ mentality. I’ve interviewed more than 60 Sears retirees in the Atlanta area and many of them say Sears really thought it couldn’t be touched. A lot of retirees say that when Sears built the Sears Tower in Chicago, it was a monument to themselves and from that point forward, it was all downhill,” Hancock says.

Hancock interviewed one former Sears employee who gave a presentation about the threat Walmart posed to the company. Hancock says the employee was told Walmart was a discount retailer and not competition, but soon after, Walmart surpassed Sears in sales.

“Sears shut down its catalog in 1993 and in my opinion, that was the watermark,” Hancock says. “That’s when everything started to change. Sears lost touch with its working-class roots by trying to sell things like the Vincent Price art collection and fine furs, and they turned their back on what had made them great. Once they lost touch with that, it was a matter of time.”

No matter what challenges Sears will face in the years ahead, Hancock says its influence on American retail will last.

“I think Sears wrote the history of retail in this country,” Hancock says. “I think the company set the standard for companies going forward. I don’t know if Amazon would be as successful as it is now without Sears.”

For more information on the similar pasts and divergent futures of Sears and Amazon, check out the March 2019 issue of Hardware Retailing.

Todd is trends editor for Hardware Retailing magazine. He graduated from Indiana University where he majored in journalism and French. Throughout his career, he has aimed to highlight small businesses and their community value. He joined NRHA in 2017.
Previous Homeowners Make Project Plans for 2019
Next The Faces of Ace Hardware: Retailer Profiles