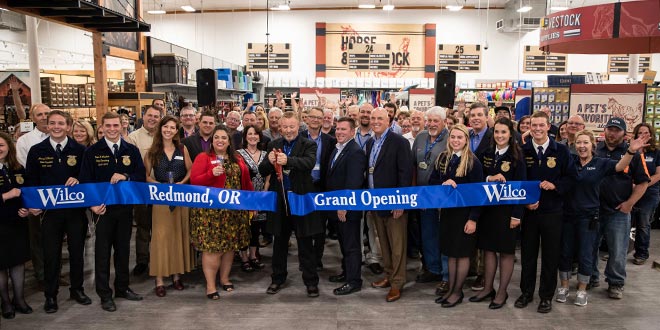 Oregon-based cooperative Wilco opened its third store in central Oregon and its 20th store overall on Aug. 29, the company reports. The 20th store, located in Redmond, Oregon, celebrated its opening with a day full of events and special activities.

Wilco is one of the largest farmer and rancher-owned cooperatives in the Northwest and it began its expansion into Central Oregon with the purchase of Round Butte Seed’s retail business in Bend and Prineville, Oregon.

TJ Colson, Wilco director of store operations, says the new Redmond store was motivated by the warm welcome Wilco received since the purchase of Round Butte Seed in 2013.

“We’ve spent a few years looking for a convenient Redmond location to improve service in the area and are excited we found this great site,” he says.

The new store is home to about 23,000 square feet of retail space. It also contains a 5,000-square-foot greenhouse plus a 15,000-square-foot warehouse. Shoppers can browse a selection of workwear and apparel, fencing material, livestock handling equipment, True Value hardware and Benjamin Moore paint. There’s also a dog grooming station for Wilco shoppers’ pets.

“There’s a slight variation at this new store, but about 95 percent of the products are the same,” Wilson says. “The climate is the biggest factor. The Redmond store is in a high desert climate, and most other Wilco locations are along the I-5 corridor, so there’s a lot more rain there. The three stores in central Oregon see a lot less rain, but they get much colder temperatures along with snow, so the central Oregon stores will carry snowblowers.”

Wilson says the new location in Redmond will also be the first to use Wilco’s updated interior decor package, which includes modern finishes and increased display options for merchandising.

“The new decor has been really well received by everyone who’s seen it, so that’s very exiting,” Wilson says.

The new store in Redmond has added 40 jobs to the community.

‘We were fortunate to have some experienced team members transfer from other locations to the Redmond area,” Colson says.

Wilson says the Redmond is a heavy farm and ranching community, and hopes customers will find what they need at the newest Wilco location.

“The store gets us closer to help more of our customers,” he says. “Redmond has been great. Already the response has been fantastic.”

Store manager Bobby Grinder, who has lived in central Oregon for a decade, says he’s been “overwhelmed by the support” the new store has received and looks forward to serving the central Oregon community.

“I’ve enjoyed working with Redmond customers and am excited to continue serving in the community,” Grinder says.

Todd is trends editor for Hardware Retailing magazine. He graduated from Indiana University where he majored in journalism and French. Throughout his career, he has aimed to highlight small businesses and their community value. He joined NRHA in 2017.
Previous Zettler Hardware: A History of Adaptation
Next Hardware Retailing October: The 10 Lists