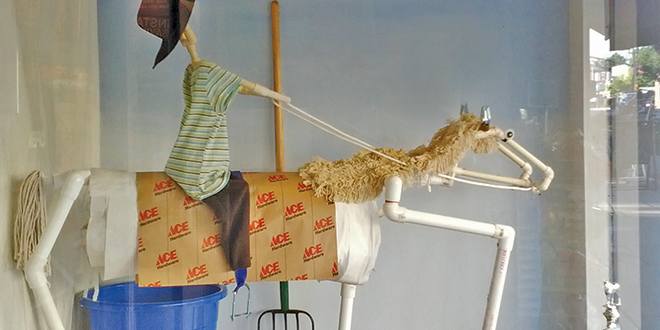 There’s a colony of PVC people living in the windows of Main Street Ace Hardware. The store, in the heart of downtown Bowling Green, Ohio, has large windows that face the street. Staff use items commonly found around the hardware store to keep the area decorated.

“We’re on one of the busiest pedestrian streets, so we put these windows to good use,” says sales associate
Kevin Pierce. “We create displays that acknowledge seasonal changes or promote downtown events and holidays.”

For example, during the Black Swamp Arts Festival, the largest downtown event of the year, passersby can see artwork by employees and other local artists. Around Thanksgiving, there’s a holiday table decorated with hardware-inspired accessories, such as candles made from toilet floats.

But one of the most popular recurring themes of the window displays is a colony of stick figures created with PVC pipe. “Occasionally our displays show one of our PVC people ‘on the job,’” Pierce says. “One window in particular was changing every couple of days to show how to install a toilet.”

In another instance, when the local college football team was playing a rival team, the window display included a kicker, cheerleaders and goalposts, all made of PVC.

Jesse Carleton has visited independent hardware retailers, conducted original research on the industry and written extensively about the business of hardware retailing. Jesse has written for more than a dozen of NHPA’s contract publishing titles, all related to the hardware retailing industry. He also was instrumental in developing the Basic Training in Hardware Retailing courses now used by thousands of retailers across the country.
Previous Painting Harness
Next Planning for Shoppers’ Impulse Snack Buys