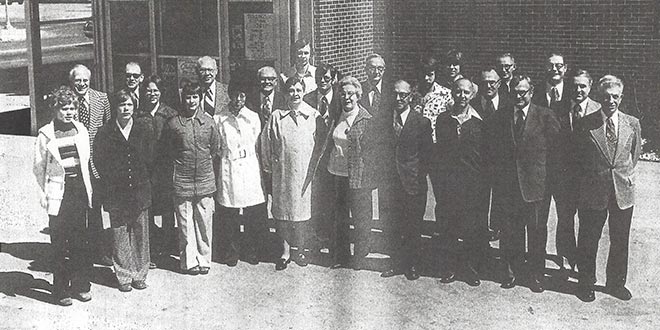 When August Trilling, a first-generation German immigrant, opened a general store in Sheboygan, Wisconsin, in 1850, he had no idea what the future would hold for his business, later named Trilling Hardware.

Since its founding, the 167-year-old company has been deeply involved in its local community.

Therese Berg, office manager of Trilling Hardware, says the business was owned by the Trilling family until 1995. At that time, August’s great-grandson Hugo Trilling sold the store to Ervin Martens.

Although the family ownership changed, the legacy the Trillings established continues to play a role in Trilling Hardware today, which Berg says is the oldest full-service hardware store in Wisconsin.

Hardware Retailing spoke to Berg to learn more about the history of the store and what to expect in the future.

Hardware is one of the few product categories that remains the same (with some modern updates, of course), the business recognizes its past in a variety of ways.

Since it began, the company has been in three different locations, and began occupying its current building in 1911. In the early years, it was a simple storefront and the family lived in an apartment upstairs. The facade of the business has been updated and there has been some remodeling throughout the years to maintain the business as well, Berg says.

“We mention the age of the business in our advertising and marketing materials all the time,” Berg says. “Our team is proud to be one of the oldest full-service hardware stores in the U.S. This information is included on our website and our Facebook page and we strive to pass that on to all our employees as well.”

When looking back at the many historical events that impacted people over the years since Trilling Hardware’s founding, the biggest difficulties that affected the company were the arrival of big-box stores in the 1990s and the recent financial catastrophes.

“Menards came to town in the 1990s and Home Depot came in the 2000s,” Berg says. “These big-box stores continue to make a big impact. However, we distinguish ourselves in many ways with top notch customer service.”

Another way the operation stands up against the competition is by providing a nice place for employees to work. Many have been longtime employees, with one employee recently celebrating 20 years of service.

“Hiring good employees is very important at Trilling Hardware,” Berg says. “Not only do we have employees who have served up to 20 years with us, but a few years ago, an employee named Dick Shulz retired after 65 years with the company. He served from 1946 until 2011.”

To grow and adapt with the times, Berg says management works hard to encourage employees to do their best and rewards them for positive results.

“The staff has a goal every month that we post on a bulletin board to exceed sales from the same month the year prior,” she says. “If we exceed sales, we pass on rewards to employees.”

This strategy has been implemented since 2005. Employees are motivated to focus on adding sales and increasing transaction sizes. They focus on every dollar increase they can make and keep working to move the needle forward, Berg says.

According to Berg, management plays a large part in helping the business ensure its longevity.

“You need to have a good purchaser on staff to keep employees working and continue to bring money in,” she says.

If August Trilling were able to walk in the doors of Trilling Hardware today, Berg says she has no doubt he’d be dazzled by what his general store has become.

“I think our founder would be so amazed at the amount of products we have in our operation,” she says. “He was a hardworking, first-generation German immigrant who was able to make his American dream come true. I like to think he’d be proud of the business today and what it’s become.”

Renee Changnon is the retail outreach coordinator for NRHA. She meets with retailers in their stores and at industry events and introduces them to the services NRHA provides. Renee previously worked as a member of the NRHA communications team. She earned a degree in visual journalism from Illinois State University, where she served as the features editor for the school newspaper. After college, she implemented marketing and promotions initiatives at Jimmy John’s franchise locations across the country. She enjoys exploring books with her book club, Netflix marathons and hosting goat yoga at her apartment complex. Renee Changnon 317-275-9442 rchangnon@nrha.org
Previous Colorful Dinnerware
Next 2018 Young Retailer of the Year: Sean Angelo