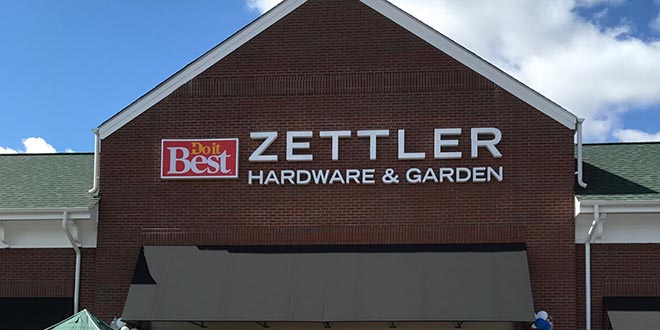 Zettler Hardware: A History of Adaptation

Zettler Hardware’s parent business opened in 1844, and its ability to adapt to the times has kept the company alive through changes that were tumultuous for retail and the country itself.

Founder John Jacob Zettler was an early settler in the Columbus, Ohio, area, who moved to the U.S. from Alsace-Lorraine. He and his family fled the war-torn European territory—which is now part of northern France—in an attempt to start a new, more peaceful life.

In Columbus, John Jacob started a meatpacking business and grocery store, launching a successful career as a business owner that has served his descendants well.

John Jacob’s son, Louis, converted the meatpacking company into a hardware retailing business in 1886, and the Zettler family has sold hardware products ever since.

Now, Louis’s grandson, John Zettler, and his son, Michael, operate five home improvement stores in the Columbus area. John and Michael represent the fourth and fifth generations of the family to run the business.

John grew up working for Zettler Hardware and saw the operation evolve over years under the leadership of his father, H. Taylor Zettler. He believes his father’s ability to adjust to change set an example for him decades ago.

“My dad was somebody who could adapt immediately, and that was a lesson we’ve learned from him,” John says. “My son adapts very quickly, too.”

Taylor led the company through uncertain periods, including the Great Depression of the 1930s and World War II.

John was working alongside his dad when Zettler Hardware faced the challenging launch of massive discount retailers like Walmart, which took off in the 1960s.

“The start of the discount houses had everyone scared in the ’60s,” John says. “We thought this was going to be the end of the hardware store.”

Instead of closing shop, John decided they could protect the business by buying their own store buildings and maintaining their independence in every way possible. Their company’s goal to provide tireless, top-notch customer service remained a constant.

“When times got really, really hard, our rent didn’t go up and we were able to fight off the discounters and big-box stores,” John says.

The family also adjusted Zettler Hardware stores’ product mix over the years and stayed in tune with their customers’ needs while many other hardware operations went out of business, John says.

For example, Zettler Hardware now specializes in lawn, garden and outdoor living products, on top of the typical core home improvement categories. Gone are the days when the business would order countless wire baskets for trash and truckloads of ironing boards.

Technology, though, has also brought rapid alterations to business over the years. John says the internet has been the biggest change to retail in his lifetime.

“I remember cranking the register for the receipt to come out and make the sale,” he says. “Now everything is computer-driven, including ordering.”

The Zettlers have long embraced online ordering and the efficiency of multiple weekly product deliveries from their co-op, and they’re looking ahead to further retail evolution.

Adaptability continues to be a family strength, and that currently involves paying close attention to new technological challenges and opportunities. John thinks Zettler Hardware’s next important operational upgrade will include digital price tags that can be changed electronically.

“Dad made the business better, and Michael is doing the same thing,” John says.

Kate is profiles editor for Hardware Retailing magazine. She reports on news and industry events and writes about retailers' unique contributions to the independent home improvement sector. She graduated from Cedarville University in her home state of Ohio, where she earned a bachelor's degree in English and minored in creative writing. She loves being an aunt, teaching writing to kids, running, reading, farm living and, as Walt Whitman says, traveling the open road, “healthy, free, the world before me.”
Previous 2018 Cost of Doing Business Study Now Available
Next Wilco Celebrates Company’s 20th Location